OXFORD, Miss. – Regan Tyler, a third-year student at the University of Mississippi School of Pharmacy, was elected as Phi Lambda Sigma’s Speaker of the House during the organization’s national meeting, held in conjunction with the American Pharmacists Association annual meeting Mar. 16-19 in Nashville, Tennessee.

Phi Lambda Sigma is a pharmacy leadership society that aims to develop leadership qualities among student pharmacists in order to strengthen the future of the pharmacy profession. 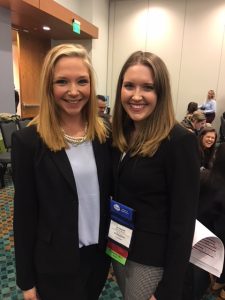 “Honestly, I was in shock,” Tyler said of being elected. “It really did not hit me that I had been elected until the current Speaker of the House asked me to return to the podium to dismiss the House of Delegates as my first ‘act of duty.’”

A native of Collierville, Tennessee, and president of the pharmacy student body, Tyler knew she wanted to serve PLS at the national level after the organization provided her with many opportunities to grow as a leader. She noted that attending the organization’s retreats helped her fine-tune her public speaking and learn more about her leadership style.

As she approaches her final year of pharmacy school, Tyler plans to pursue a career in the pharmaceutical industry as a medical science liaison or the medical information field. She believes her role as Speaker will help her achieve her professional goals as she meets other leaders in the pharmacy profession.

“Regan is very deserving of this national recognition and responsibility,” said David D. Allen, dean of the School of Pharmacy. “She does a wonderful job leading as student body president, and I’m excited to see how she will impact the future of pharmacy.”

Ole Miss is actively involved in PLS. Fourth-year student pharmacist Kathy Lee Barrack serves as president of the local chapter, making her a House of Delegates member, and School of Pharmacy alum Jillian Foster is the organization’s parliamentarian. The school’s chapter also initiates between 20 and 30 students and several faculty members each spring.