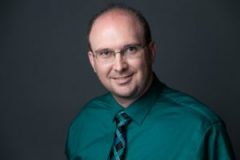 Charles (Chuck) Mobley has a Ph.D. in Biochemistry from Vanderbilt University and a BS in Biochemistry from Arizona State University. He joined the lab as a postdoc in October of 2015 and oversees projects involving protein-glycan interaction studies using FPOP (Fast Photochemical Oxidation of Proteins) measured via Mass Spectrometry.  This includes the oversight of two undergraduate students who, occasionally, are also asked to do preliminary work for grant proposals. The most recent example of such work was determining if different DNA adducts could be quantified in samples run on the lab’s liquid chromatography – mass spectrometry (LC-MS) system. Dr. Mobley is also responsible for laboratory safety, maintenance of the lab’s class IV UV-laser, and the cell culture laboratory. He also has extensive experience in membrane protein expression and protein NMR methods.