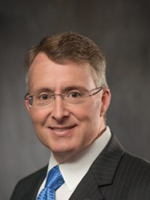 Dean of the School of Pharmacy, Executive Director of the Research Institute of Pharmaceutical Sciences, Professor of BioMolecular Sciences
TCRC 1017
662-915-7265
allen@olemiss.edu

Dean Allen’s research interests are in the area of brain drug delivery, blood-brain barrier function and nutrient transport as well as cellular uptake kinetics. In addition he has investigated academic administration, predictors of success in pharmacy education, interprofessional education and assessment.

Dean Allen received his bachelor’s degree in pharmacy at the University of Kentucky, then practiced community pharmacy for several years before returning to UK to earn his Ph.D. in pharmaceutical sciences. He has been licensed to practice pharmacy in five states and has been a visiting scientist in Chile, France and Switzerland, as well as at the Laboratory of Neurosciences’ Neurochemistry and Brain Transport Section of the National Institute of Health’s National Institute on Aging, where he also was an Intramural Research Training Award Fellow.

He has served as principal investigator or collaborator on more than 30 research projects funded by the NIH, American Heart Association, American Association of Colleges of Pharmacy, the government of Chile and pharmaceutical companies.