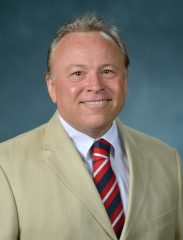 Dr. Nagle’s research focuses on the pharmacological activity and biomedical potential of natural products as new sources of drug leads for the treatment of cancer and pharmacological probes. His program combines natural products chemistry with innovative cell-based and molecular mechanism-targeted bioassay techniques. He and Dr. Yu-Dong Zhou (Department of Chemistry and Biochemistry) have developed new molecular/mechanism-targeted bioassays to investigate natural products for their potential to supplement existing chemotherapeutic agents by acting as promoters of tumor differentiation and survival pathways. Dr. Nagle’s research examines new methods to rapidly detect the presence of potentially useful anticancer agents that target specific biochemical mechanisms involved in the development and spread of invasive breast tumors.

In addition to his University of Mississippi appointments, Dr. Nagle works with a number of international research programs from around the world. He has been appointed a Hunan Overseas Distinguished Visiting Professor at the Hunan University of Chinese Medicine. In collaboration with scientists at several Chinese institutes, his group is working to determine the anti-metastatic breast cancer potential of compounds found in Traditional Chinese Medicine (TCM) products. One goal of this research is to determine the mechanisms by which Chinese Traditional Medicines may act in cancer prevention and treatment.

Built on recent discoveries regarding how tumors metastasize to distant sites, Dr. Nagle’s program also searches for agents that interfere with the organ-specific genetic preprogramming of aggressive “triple-negative” breast tumor cells to various organs. Triple-negative breast tumors lack some of the important targets of several major anticancer drugs and are often difficult to treat. The aim of this research is to discover new therapeutic targets and potential drugs that will block the spread of these highly invasive and treatment-resistant forms of breast cancer.

Dr. Nagle received his undergraduate training at Portland State University and Oregon State University, where he earned his B.S. in Pharmacy in 1989. He earned his Ph.D. in Pharmacy in 1994 at the Oregon State University College of Pharmacy. His graduate research detailed the chemistry and biosynthesisof marine eicosanoids and antitumor agents. Dr. Nagle worked at the University of Guam Marine Laboratory (1995-1996). He then joined the Department of Biochemistry at the University of Texas – Southwestern Medical Center at Dallas. Dr. Nagle joined the Department of Pharmacognosy in 1997. He was appointed Professor of Pharmacognosy and Research Professor of RIPS in 2009.