OXFORD, Miss. – Alix Cawthon, a second-year pharmacy student at the University of Mississippi, is the winner of a Kappa Epsilon Zada M. Cooper Scholarship. 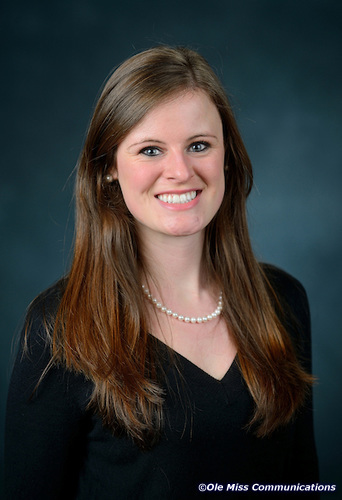 Kappa Epsilon is a professional pharmacy fraternity founded in 1921 with the mission to serve women pharmacists, and now champions women’s health issues. The fraternity’s foundation promotes scholastic and professional advancement among its members with awards, fellowships and scholarships such as the Zada M. Cooper Scholarship, a $750 award given to five students each year.

Cawthon became a member of the UM chapter of Kappa Epsilon as a sophomore in the Early Entry pharmacy program. After a year, she became the organization’s secretary and now serves as the Kappa Epsilon president.

“While Alix has demonstrated she can excel within the academic rigor of a challenging pharmacy curriculum, perhaps one of her most outstanding characteristics is the ability to accomplish so much academically with a humble and quiet approach, coupled with her service to others,” said David Gregory, associate dean for academic affairs in the School of Pharmacy. “She is well respected by the faculty, her fellow students and certainly by our administration.”

Cawthon, an Abita Springs, Louisiana, native, plans to complete at least one year in a hospital residency program upon completing her Pharm.D., where she hopes to specialize in infectious diseases.

“Receiving this national scholarship will hopefully give me a leg up in the residency application process, and, of course, it also helps alleviate the burden of student loans,” Cawthon said.

Cawthon spent an extensive amount of time on the scholarship application, which required several essays about her career goals and how she will contribute to Kappa Epsilon in the future.

“Alix is a very bright young woman with innate abilities,” said Rachel Robinson, pharmacy practice professor and faculty adviser of Kappa Epsilon. “She has an intellectual curiosity that is indicative of her skills and willingness to learn.”