OXFORD, Miss. – Ikhlas Khan became director of the National Center for Natural Products Research at the University of Mississippi School of Pharmacy on Jan. 1. 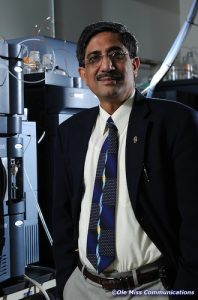 Ikhlas Khan, director of the NCNPR

After receiving his doctorate in pharmacy from the Institute of Pharmaceutical Biology in Munich Germany, Khan joined the School of Pharmacy in 1988 as a postdoctoral research fellow and became NCNPR’s associate director in 2015. Founded in 1995, the NCNPR is the nation’s only university-affiliated research center devoted to improving human health and agricultural productivity through the discovery, development, and commercialization of pharmaceuticals and agrochemicals derived from natural products. The center’s former director of 15 years, Larry Walker, retired Dec. 31, 2016.

Khan’s plans as director of NCNPR include steady improvement and a continuation of past successes.

“The vision is very simple and broad: We want to continue doing what has worked, but keep evolving,” Khan said. “Change is the only one thing should be constant. We have done a wonderful job over the last 20 years. The timing is right, and the expertise is in the house to take on any natural products challenge.”

Khan has been internationally recognized as a leader and innovator in the study of natural products. He has received honorary degrees and professorships from several international universities, including the University of Chinese Medicine in both Shaanxi and Hunan. In the field of natural products research, he has won the UM Distinguished Research Award, the Indian Association for the Study of Traditional Asian Medicine Zandu International Oration Award for Excellence in Research Contribution to Ayurvedic and/or Natural Products and the American Society of Pharmacognosy’s Varro E. Tyler Prize.

Khan’s research focuses on drug discovery and developing scientific tools for assessing the safety and chemical makeup of dietary supplements that are commercially available. Scientists at the NCNPR use these methods in conjunction with the U.S. Food and Drug Administration, a partnership established in 2001. The NCNPR was recognized by the FDA as a Center of Excellence for its research of botanical dietary supplements in 2006, and received the FDA Commissioner’s Special Citation in 2009.

Khan also established and directs the Sino-U.S. Traditional Chinese Medicine Research Center and the Center for Research of Indian Systems of Medicine, both at the university.

“He has a very strong collaborative vision,” Walker said. “He’s very open to new ideas and good at evaluating them. He knows how to take an opportunity and grow it to make it into an even bigger and more beneficial opportunity.”

One such opportunity was the creation of the annual Oxford International Conference on the Science of Botanicals. Khan was instrumental in the creation of the Oxford ICSB, designed to gather an international community of stakeholders to discuss issues related to quality and safety of botanicals. The conference has grown to over 250 participants from around the world. Khan also co-directs the NCNPR’s marijuana project, which grows marijuana and distributes it to researchers under a contract with the National Institute on Drug Abuse.

“Ikhlas will be fantastic in this role,” said David D. Allen, dean of the School of Pharmacy. “He has a clear vision for the quality and safety of natural products, and has a knack for leadership and for drawing people together to make things happen.”

“This is really an honor, and I am very grateful for this opportunity,” Khan said. “We have a state-of-the-art facility and wonderful colleagues with diverse expertise here.”