JACKSON, Miss. – Kandis Backus, a fourth-year student in the University of Mississippi School of Pharmacy, found a volunteer experience to be inspiring. She not only discovered a career path but also will have a paper published in Sexually Transmitted Diseases, the journal of the American Sexually Transmitted Diseases Association in February 2017. 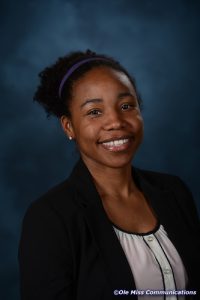 A Chicago native, Backus’ paper, “Trichomonas vaginalis treated with boric acid in a metronidazole allergic female,” focuses on research she conducted on HIV and sexually transmitted infections while volunteering at the Open Arms Healthcare Center in Jackson, which specializes in care for the LGBTI community. After standard treatment was unsuccessful for a patient diagnosed with the sexually transmitted infection trichomoniasis, Backus consulted literature on treating the illness, eventually finding a cure in boric acid.

“Managing HIV disease can be very complicated and intimidating at times,” Brown said. “Over the years I have witnessed both pharmacy students and pharmacy residents who are initially reluctant to interview an HIV-infected patient. Kandis never gave it a second thought. Our patients enjoyed her because she did not only showcase her passion for managing HIV disease, but more importantly, she allowed her compassion for patients to reign supreme.”

Backus hopes her volunteer experience will lead to eventually working with HIV patients in a clinical setting.

“I encourage other students to volunteer, to help them find their passion,” Backus said. “Without this experience, I doubt I would have developed a passion for HIV.”

During her time at Open Arms, she worked alongside Laura Beauchamps, then the clinic’s medical director, researching literature, treating patients and contacting their primary care physicians.

“Kandis was very motivated to learn about [sexually transmitted infections] and HIV care and prevention at our clinic,” Beauchamps said. “I think she will have a brilliant future as a pharmacist.”

Backus will receive her Pharm.D. in May 2017, and hopes to pursue a Ph.D. in biomedical sciences.

“For years I have wondered what pharmacist would be willing to step into the role of managing HIV in Mississippi,” Brown said. “I believe I found that person in Kandis.”