OXFORD, Miss. – Every year, School of Pharmacy scientists present their research findings at the school’s poster session to explore one another’s work and create partnerships. Now in its 20th year, the poster session is a well-attended forum for scientific conversation, thanks to the efforts of Julie Mikell, School of Pharmacy principal research and development chemist. 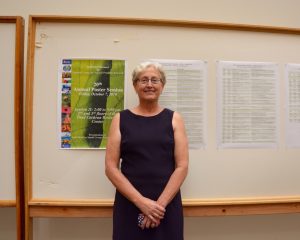 Julie Mikell at the 2016 poster session.

“It’s a great way to see what everyone else is doing,” Mikell said. “Seeing other people’s work could spark a collaboration. You might need someone to help you with a particular part of your research, and by attending this session, you can find and talk to other researchers who may have that particular expertise.”

The idea for the poster session started by way of an interviewee who worked at a university that regularly held a poster session. Inspired by the potential for collaboration, the school invited scientists to share posters of their findings for the first time in 1996. After the success of the first year, Alice Clark, vice chancellor for research and sponsored programs, approached Mikell about taking charge of the event.

Since then, the poster session has grown to over 100 posters annually. Several years ago, a poster session website was created, giving Mikell more time to focus on the synergy the session was designed to foster. A session for posters from each department in the school was added in 2012.

“This was all new to me,” Mikell said. “It’s not my background. I am a scientist. But I do like to organize things. When given an idea, I am able to sit down and work out the minor details to make it work. That’s just part of me.”

In addition to putting on the biggest display of the School of Pharmacy’s research each year, Mikell has had a long and productive career. Her work as a chemist includes identifying and isolating organic compounds found in or created by plants. She developed the process by which the school extracts plant matter for research purposes. Before the school purchased an instrument that would do it all for her, she personally ground plant samples, extracted them, inventoried them and then submitted them for testing and experimentation.

Her success in managing the poster session can be attributed to her organization and dedication, as well as a small team she works with.

“I do not require a lot,” Mikell said, of the guidelines to submit a research poster. “To streamline the process I don’t insist on an abstract be submitted, I only require basic information such as title, author, who’s presenting and what department they’re from. The title will allow attendees to see if it is something they are interested in.”