Vedanjali Gogineni, a native of Andhra Pradesh, India, and a University of Mississippi Ph.D. candidate in medicinal chemistry in the School of Pharmacy, received a 2016 Graduate Student Research Award in Drug Discovery and Development Interface from the American Association of Pharmaceutical Scientists. 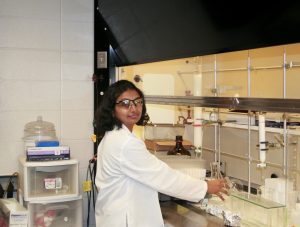 AAPS gives four of these awards per year to recognize graduate students who significantly influence the research in their field. The award includes a $250 prize and travel expenses to the AAPS annual meeting.

“This national recognition means a lot to my career,” Gogineni said. “Any recognition is valuable, especially as a graduate student. I hope this will create opportunities for the future, especially since it is so competitive.”

Gogineni’s award-winning research is an abstract titled “Phytochemical Investigation of Secondary Metabolites in Psychoactive Medicinal Plants for the Treatment of Neurological Disorders,” which explores compounds from medicinal plants that could treat neurological disorders.

This research discovered a compound that could be used to treat Alzheimer’s disease, Parkinson’s disease and depression. Gogineni’s overall research works to identify and purify new natural products, some of which have an affinity with opioid or cannabinoid receptors to treat pain without addiction.

“It is a significant accomplishment to be recognized by the AAPS with a graduate student research award,” McCurdy said. “These awards are highly competitive, and such recognition speaks to the quality of Veda’s research. She is a deserving awardee and serves as a great ambassador of our graduate program.”

Gogineni is also a member of the university’s chapter of honors and service organization Gamma Beta Phi, and hopes to find a postdoctoral position after her May 2017 graduation. She will be recognized at the AAPS annual meeting on Nov. 13-17 in Denver.