OXFORD, Miss. – Babu Tekwani, principal scientist in the University of Mississippi’s National Center for Natural Products Research and professor of pharmacology in the School of Pharmacy, was honored for his outstanding research contributions to global health drug discovery in tropical parasitic diseases at an international conference in León, Spain, on July 15. 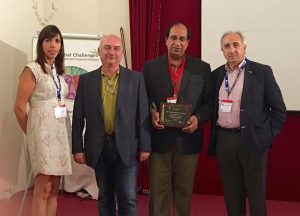 Tekwani has researched neglected tropical parasitic diseases such as malaria, leishmaniasis (an infection spread by sandflies) and human African trypanosomiasis (aka sleeping sickness) for more than 30 years. His work has identified potential new molecular targets and sources for anti-parasitic drugs that would help eradicate these diseases, and developed new ways to test the drugs’ efficacy.

“I am very pleased to see this recognition of Dr. Tekwani’s leadership and sustained research effort toward combating these diseases, which devastate so much of the world,” said Larry Walker, NCNPR director. “His work at NCNPR has resulted in the establishment and growth of a robust and productive anti-parasitic drug discovery program.”

The conference in León was founded to discuss the progress and challenges of anti-parasitic drug discovery in response to a 2015 Nobel Prize awarded to researchers who discovered therapies to combat roundworm parasites and malaria parasites. Tekwani was one of several advisers for the conference, which included scientists from over 25 countries, and delivered the closing keynote address, “New Anti-Parasitic Drug Discovery from Natural Products: Challenges and Opportunities.”

“With his outstanding research contributions on tropical parasitic diseases, Dr. Tekwani rightly deserves to achieve this recognition,” said Rafael Balaña-Fouce, professor of biomedical sciences at the University of León and organizer of the conference.

Neglected tropical diseases are categorized as such if they disproportionately affect impoverished people and traditionally have not been the subject of much research. Tekwani’s work in this area previously has been recognized by the National Institutes of Health, World Health Organization and Council of Scientific and Industrial Research in India.

“Tropical parasitic diseases are major global health problems and threats to human health,” Tekwani said. “Almost half of the world’s population is exposed to the risk of being affected with one of these diseases. With the emergence of drug resistant and more virulent strains of the pathogens, there is a constant need for discovery of new drugs. It’s encouraging to get your research recognized globally.”