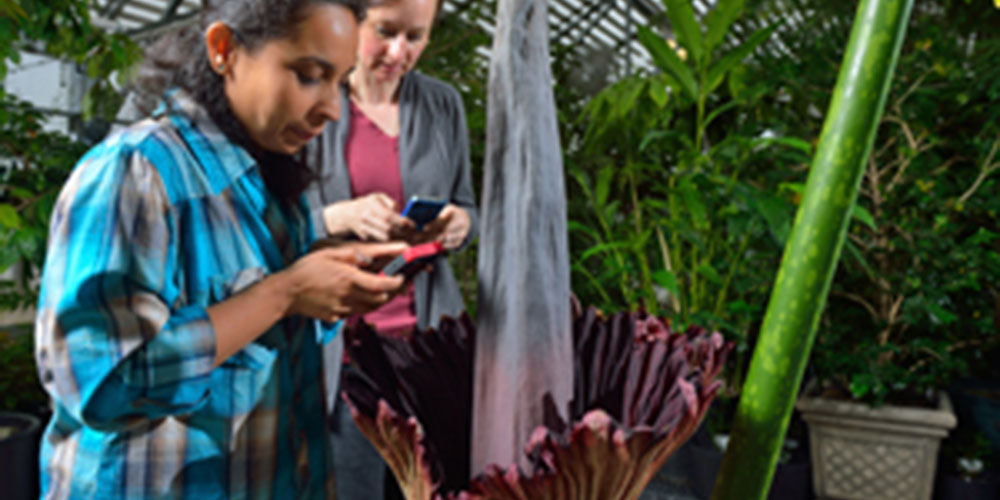 Visiting the Maynard W. Quimby Medicinal Plant Garden at the University of Mississippi can feel like stepping into a tropical rainforest – their greenhouse is filled with rare and unusual florae.

One of these species, the titan arum, is among the most extraordinary in the garden’s collection. The plant has the largest unbranched inflorescence in the world. One of the garden’s 21 titan arum plants recently bloomed and another is blooming now.

This is a rare occurrence for a number of reasons.

“Titan arum (Amorphophallus titanum) is an endemic species, found naturally only in the rainforests of Sumatra in Indonesia,” said Vijayasankar Raman, systematic botanist for the National Center for Natural Products Research. “The plants take about five years or more to start flowering and subsequently bloom infrequently, once in three or four years, and even more rarely in cultivation. Whenever the plants bloom, they make a headline.”

The garden’s first bloom, which occurred in May, grew slightly over 4 feet tall. It was the world’s first recorded bloom of 2014. The new bloom is already 5 feet tall.

The plant has an almost otherworldly appearance. Its inflorescence is composed of the spathe, a petal-like structure, and spadix, the central column. The spathe becomes a dark crimson color as it blooms.

Adding to the bizarre nature of this species, titan arum is commonly known as the “corpse flower.” It emits heat and an odor similar to the smell of a decomposing mammal in order to attract flies and beetles that pollinate the flowers. Raman said that it is “one of the most malodorous plants in the world.”

The garden’s staff has taken great care to ensure conditions are suitable for blooming. Ed Lowe, senior research and development horticulturist, has worked extensively with the plants.

“I have repotted these plants at least four times, over a five-year period,” Lowe said. “The last time was the hardest due to the size of the plants and pots. The staff at the garden, tries to keep all plants watered, fertilized, and repotted to the best of our ability, at all times. We want them all to bloom.”

Raman encourages spectators to visit the garden while the plant is blooming.

“This is a spectacular and giant flower,” he said. “Only a few gardens in the world have this priceless collection of plants. It is a rare opportunity for us to observe this occurrence.”